If the idea of the universal fight between humans and demons excites you and you are a fan of Japanese anime like me, then I’ll definitely suggest you to start watching Blue Exorcist. And for those who are waiting for Blue Exorcist Season 3 like thousands of fans, we have good news for you!.

I know after the cliffhanger of season 2 everyone is waiting for the next season to come. This article will provide you with everything you need to know. You will know everything, from the release date to the plot and many other interesting facts here.

The First Release of Blue Exorcist

Kazue Kato wrote the manga with the same name and Tensai Okamura directed the first season of the anime series. Moreover, Koichi Hatsumi directed the second one and the season was produced by “A-1 Pictures”.

What Happened in Season 1?

In the Blue Exorcist Season 1, the anime depicted the idea of Assiah where humans used to  live and Gehenna where demons lived. Any contact between these two dimensions was seemingly impossible.

However, the ruler of Gehenna, Satan, sent his son Rin Okumura into the realm of humans, Assiah, hoping Rin to be his host. But when our protagonist Rin Okumura, who was raised by Father Shiro Fujimoto, came to know the fact that he was actually Satan’s son, he seemed not to like it.

At the end of season 1, when Shiro died to keep him safe, Rin became angry. He took on the pursuit of becoming an exorcist to defeat his so-called father Satan and to defend Assiah.

What Happened in Season 2?

In Blue Exorcist Season 2, revealing the fact that Rin was the son of Satan Rin created a misunderstanding between Shura, Yukio the younger brother of Rin, and the Esquires. Rin then tried to reclaim the “Left Eye of the Impure King” and continued with his training to control his powers.

Then some traitor stole “The Right Eye of the Impure King”. Rin kept trying to get hold of the demon sword. The impure king with his irresistible growth got revealed and Rin tried to defeat him with the sword at the end of the second season.

What Will Happen in Season 3?

The answer to this question can be found in the manga series, the source of the anime. The manga has a total of 25 volumes that’s already been published while the first two seasons covered only 9 volumes.

The story will originate from the “Illuminati arc” which is in the 35th chapter of the manga. A forthcoming Illuminati ploy by their leader Lucifer to awaken Satan again will possibly take place in the upcoming season.

Satan’s transformation into a huge Gehenna Gate can also take place. The demons along with Lucifer will try to reunite the Assiah and the Gehenna into one as before and our only hope is Rin and Yukio to halt their progress.

When Will Season 3 Be Aired?

The first and second season aired on April 17, 2011, and January 7, 2017, respectively. From these dates, you can see that the second season began premiering almost after 6 years.

And you also have to bear the fact that we are now in the middle of a pandemic. So the possibility of the production getting delayed is understandable. We can expect the third season to be on air at the end of 2022 or at the beginning of 2023 for sure.

We hope that, by that time Mob Pscycho 100 Season 3 will also be released.

Can people under the age of 18 watch this anime?

Answer: No, I don’t think so as there’s much violence involved with so much blood. Also, the conflicts between Satan and Godlike stuff can become very nasty.

Is the Blue Exorcist anime series available on Netflix?

Answer: Yes, you can find both season 1 and season 2 now on Netflix.

How old is Rin Okumura from Blue Exorcist?

Answer: He is a sixteen-year-old teenager.

Does Rin have a girlfriend?

Answer: No, but he has feelings for Shiemi who can be his girlfriend in the third season.

Is Yukio Okumura a demon in Season 2?

Answer: No, he is still a human as this season is continued from episode 16 of season 1.

Does Rin know Mephisto is his brother?

Answer: Yes they both know.

Who is the most powerful in Blue Exorcist?

Blue Exorcist teaches us that your past doesn’t define you. You are who you choose to be. Thus being the son of Satan, Rin Okumura decided not to follow him rather fight him and defend the humans in Assiah by being an exorcist.

I know it is hard to wait for Blue Exorcist Season 3. But don’t lose hope. And until then you can watch Cells at work Season 2. 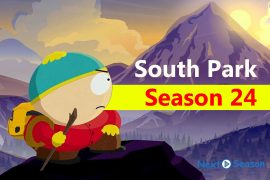